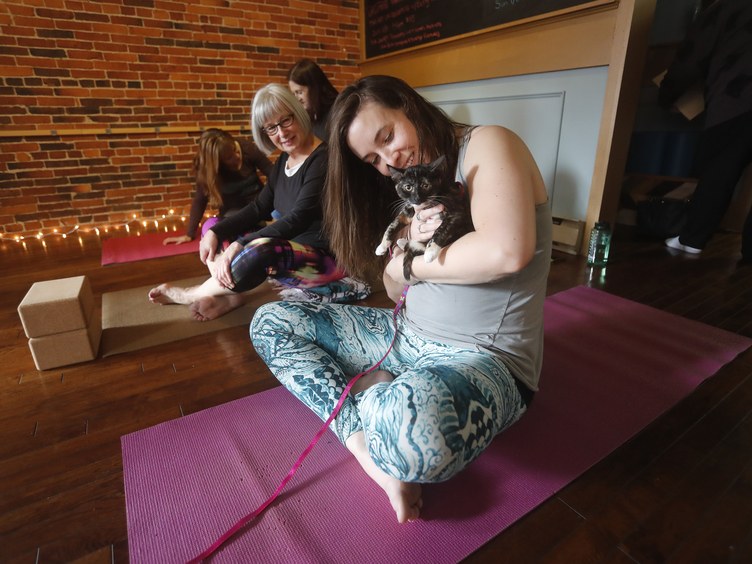 You know what is a new addition to the numerous pre-existing aspects of Yoga? It’s kitten yoga.

Animal welfare organizations and yoga clubs are coming together to organize the kitten yoga classes at community centers or in-house or across the country.

Yoga instructor Lianna Halko hosted Long Island’s first kitten yoga class at Caya fitness studio in August with North Fork Country Kids. It was where she found her cat Midas. “I’ve always played around with the idea of combining these two things I love the most—cats and yoga—so it was just a matter finding someone open to letting that kind of wacky idea come to life,” she tells SELF. “I’m so lucky to have a really awesome boss who let me host the event at the studio.” Kitten yoga is now a monthly offering at the studio, and this past Sunday, Halko taught two classes in order to meet demand.

Thank you to everyone who came out for our 2nd Kitten Yoga event! A special thank you to @stephanierosetv , for such a fun Facebook live broadcast, and to @lianna_yoga for leading two awesome classes! We'd also like to thank @nfcountrykids for bringing their adorable kittens to our studio. We hope you all enjoyed meeting and playing with them as much as we did! ?? Check out the video -> link in bio.

“We open up the room to between 15 and 20 people to make sure it’s a safe environment for the people and the kittens,” Halko explains. “Once everyone is set up with their mats, we release the kittens. It’s a very informal class—during downward facing dog, for example, someone might take a mouse toy that’s near their mat and toss it across the room for a cat to grab. It’s pretty funny to watch.” Volunteers who make sure everything moves smoothly.

It’s work too. “It’s a very gentle class. I think of it as [an exercise in] being able to relax and not take things so seriously. We figure incorporating kittens is the perfect way to do that. It’s also for a good cause, so every way you look at it, it seems to make sense.” Normally, Halko teaches a rigorous Vinyasa flow class, so she feels kitten yoga is also a way to make Vinyasa accessible for beginners. “Anyone can come, even if you’ve never set foot on a yoga mat.”

The goal is to get kittens adopted and increase awareness about animal welfare organizations. “[Kitten yoga] has turned into a huge thing,” says Meghan Scheibe, director of development and marketing at the Lawrence Humane Society in Kansas. “We’ve been talking about doing a kitten yoga class for quite a while. Our limitation at our shelter was that we don’t have any space for a class like that.

“Kittens have claws, and studios sometimes have special floors.”

“We like to find unique and interesting ways to promote animal welfare and to foster the human-animal bond,” Scheibe says. “We understand that not everyone is able to adopt, but that doesn’t mean they’re not a pet person or not an animal lover.”

They let participants to interact with the kittens in a more natural setting. “We really wanted to give these shelter pets more exposure and hopefully the chance to get adopted,” Scheibe adds. Following the group’s kitten yoga class over Labor Day weekend, the entire litter was adopted, some by participants. In Halko’s case, too, a handful of cats were adopted.

yoga
Previous Article10 Safe Exercise Tips during WorkoutNext ArticleHere is what happens when you practice Yoga outdoors
PASSIONATE ABOUT FITNESS & WELLNESS? Bring it on! We would love to hear from you. We welcome inspirational quotes, articles and infographics.