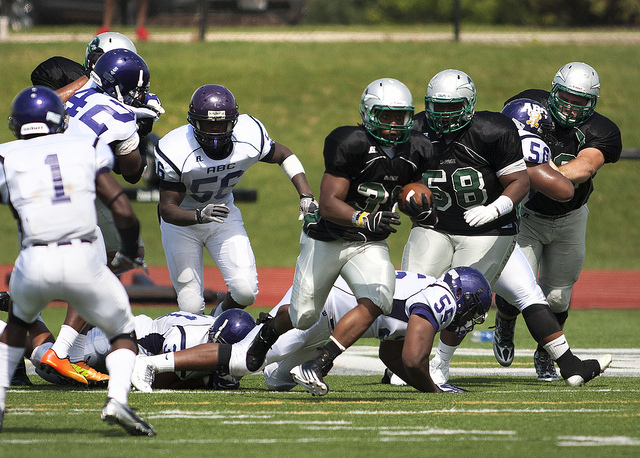 We’ll call it the “Case of the Feverish Sport Nut.” The facts: A 16-year-old male downs a quick snack of roasted pistachios before heading out for a pigskin playoff. Half an hour into the game, the teen becomes hot and itchy, soon noticing that his skin has broken out in hives and his eyelids have swollen. Before long, the player has lost consciousness. Within a couple of hours of being treated with antihistamines and a corticosteroid, though, he has recovered. Could this be evidence of football foul play? Or has something else kicked this athlete’s bodily defenses into high gear?

As with many severe, multi-symptom allergic reactions, generally known as anaphylaxis, the cause of this boy’s symptoms was initially a mystery. But after working through a series of tests, here’s what the patient and his doctor discovered: the teen could eat his same snack at rest without problem. Prick-by-prick, specific IgE antibody, and open oral challenge tests with roasted pistachios were all negative. A treadmill stress test gave him no trouble, even an hour after eating a meal. But ingesting those seemingly innocuous green nuts followed 60 minutes later by a routine run (a test known as a specific food exercise challenge) yielded a positive result – if you call facial welts positive. The reason? The teen suffered from food-dependent exercise-induced anaphylaxis, a rare disorder more commonly known as exercise-induced allergies. The trigger? Chasing those pesky pistachios with physical exertion.

As seen in the example above, food-dependent exercise-induced anaphylaxis (FDEIA) occurs only when the sufferer has eaten the trigger food and exercised, typically within one to three hours. Consuming the specific food (which could be anything from nuts or shellfish to produce or dairy, though the most common culprit is wheat) and working out exclusive of one another won’t cause an allergic reaction. Why, you ask? Some experts attribute FDEIA to changes in the way our bodies process certain allergens after exercise, while others point to abnormalities of the autonomic nervous system; still others argue that working out increases GI permeability, allowing undigested allergens to more easily pass to the circulatory system. No matter how the disorder exercises its muscle, the only way to diagnose FDEIA is to demonstrate the correlation between a specific food and the development of an allergic reaction after exercise. Such a relationship is usually identified through a challenge test. (And, of course, the best way to diagnose FDEIA is under the supervision of a doctor).

According to the Food Allergy & Anaphylaxis Network, FDEIA appears in twice as many women as men and usually strikes people in their late teens to thirties. The level of exertion required to trigger an attack depends on the person’s level of physical fitness – intense exercise such as jogging, biking, and dancing are more commonly associated with the disorder, but activities such as walking or housework have provoked reactions in less fit individuals. Sufferers experience increasingly severe reactions, as this type of allergy attack progresses through its four stages: Prodromal symptoms include fatigue, generalized warmth and sweating, and redness/flushing and itching of the skin. The early phase leads to large hives (swelling on the surface of the skin) and angioedema (swelling underneath the skin). Fully established attacks can produce choking, throat constriction, wheezing, colicky abdominal pain, diarrhea, nausea, shock, and vomiting. The late phase may result in frontal headaches that persist for one to three days.

So what’s an allergic athlete to do? Well, since the reaction gains strength the longer a sufferer exercises, stepping off the treadmill at the earliest sign of an attack is essential. In studies, ceasing physical activity usually results in an immediate improvement in symptoms. Antihistamines may also help symptoms, but the strongest course of action is prevention via education. In other words, know your weakness. Sufferers must identify which foods trigger an exercise-induced reaction in their bodies and avoid consuming those specific items in the 12 to 24 hours prior to amping up physical activity. (Not sure what the offending item might be? Then it’s best not to eat anything at all six to eight hours before working out.) Experts also recommend exercising with a buddy and carrying an Epi-pen at all times. And as with any workout, careful monitoring of your body’s response to increased exercise will help you stay healthy and hive-free.

Brett Warren is a fitness and weightlifting enthusiast from Boston, Massachusetts. He is passionate about nutraceutical science and loves his job developing workout supplements for Force Factor. Brett’s extensive background in biochemical engineering means he’s one scientist you don’t want to mess with. When Brett is not crushing it in the gym or working at Force Factor, you can find him spending time outdoors with his family.

Guest Author
Pilates & Yoga Fitness welcomes new article contributions for our growing blog community. Visit https://pilatesandyogafitness.com/write-for-us/ for more details on how you can contribute to our site.
PASSIONATE ABOUT FITNESS & WELLNESS? Bring it on! We would love to hear from you. We welcome inspirational quotes, articles and infographics.